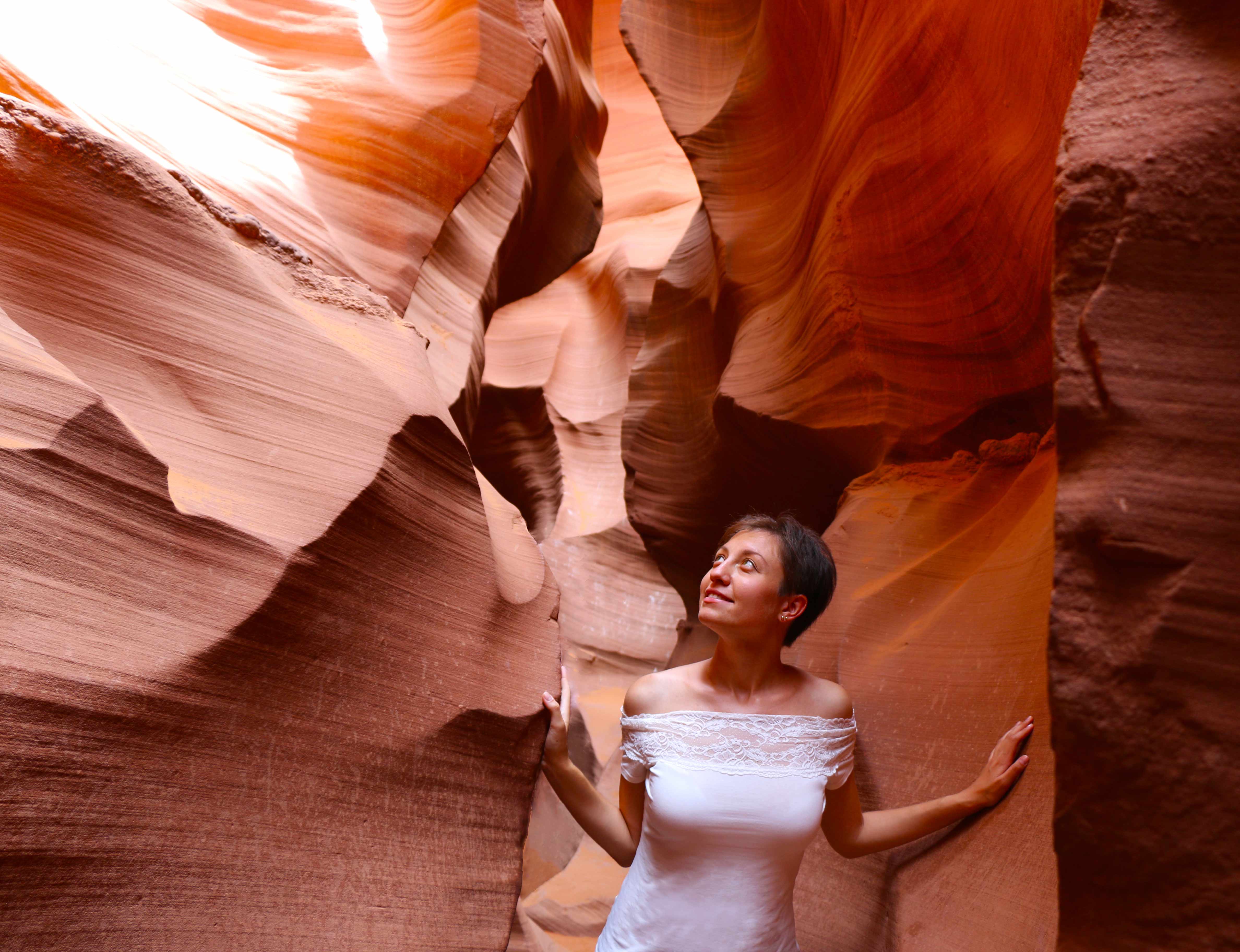 WHAT TO EXPECT FROM LOWER ANTELOPE CANYON, ARIZONA?

I think there is no need to describe ethereal beauty and unbelievable nature’s fantasy while speaking about Lower Antelope Canyon. If you have happened to see its photos, or if you are already planning your visit, I’m sure you have heard these epithets. So have I. Thus, having seen lots of beautiful pictures, I have decided to go there and walk down its bending ‘street’ while enjoying its exceptional facades. Listen how it has turned out! 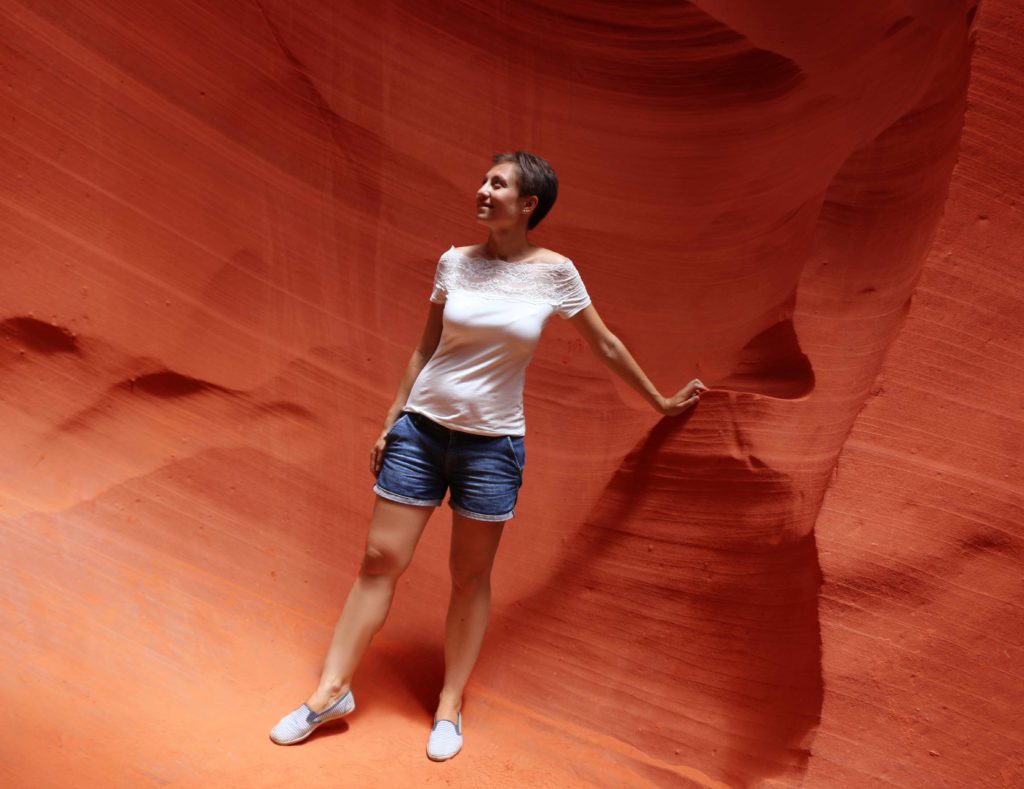 Lower Antelope Canyon is located on the territory of Navajo nation, close by the town of Page, Arizona. You can recognize the place by large parking lot behind which you will see one-storey building of Ken’s tours. You will see the line outside the building, where you can show your reservation, receive your ticket and start waiting (I will write about reservation in details later). Here I emphasize ‘start waiting’ because apparently this is an inevitable part of the adventure. 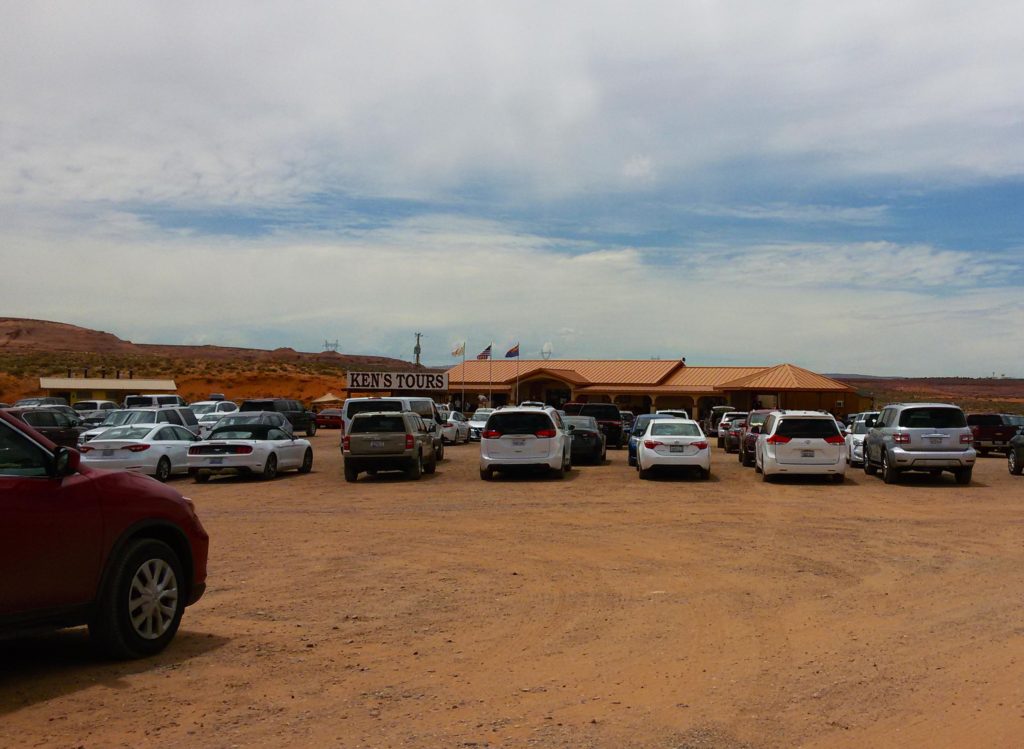 …And while we are waiting, may I add a lyrical-technial digression here? The Lower Antelope Canyon is located on a private territory, and tourists are being shared by a brother and a sister, Ken and Dixie (her office is also located nearby). The difference between their tours was a couple of dollars, and if there is no actual difference, what’s the point of paying extra money? So, we preferred the elder brother :)…

After some time you have finally already joined your group and headed towards your last line for today.  In some hundred meters away from the building another bunch of people is waiting its turn. They are squeezing under the tent trying to escape from the heat. From distance it looks as if a bus with transparent walls has parked in front of the entrance of the canyon. If you are lucky you may even find a place in the shadow. Still waiting.

…As I have already mentioned, canyon has two owners, but as you may guess there is only one entrance. Since everybody wants fair and square game, first the brother’s group enters and then the sister’s one. Which means what? Your waiting time doubles. Before going there I have read that the best time to visit the Lower Antelope Canyon is between 11 and 12 a.m. We have booked a tour that would depart at 10:10 a.m. Unfortunately, I have lost count when we finally got there. We kinda caught the last train, as so much praised colors and light refractions were already disappearing. I do not promise that you gotta wait that much if you go there, rather I describe my experience…

Finally, our turn has come. Let’s dive in! 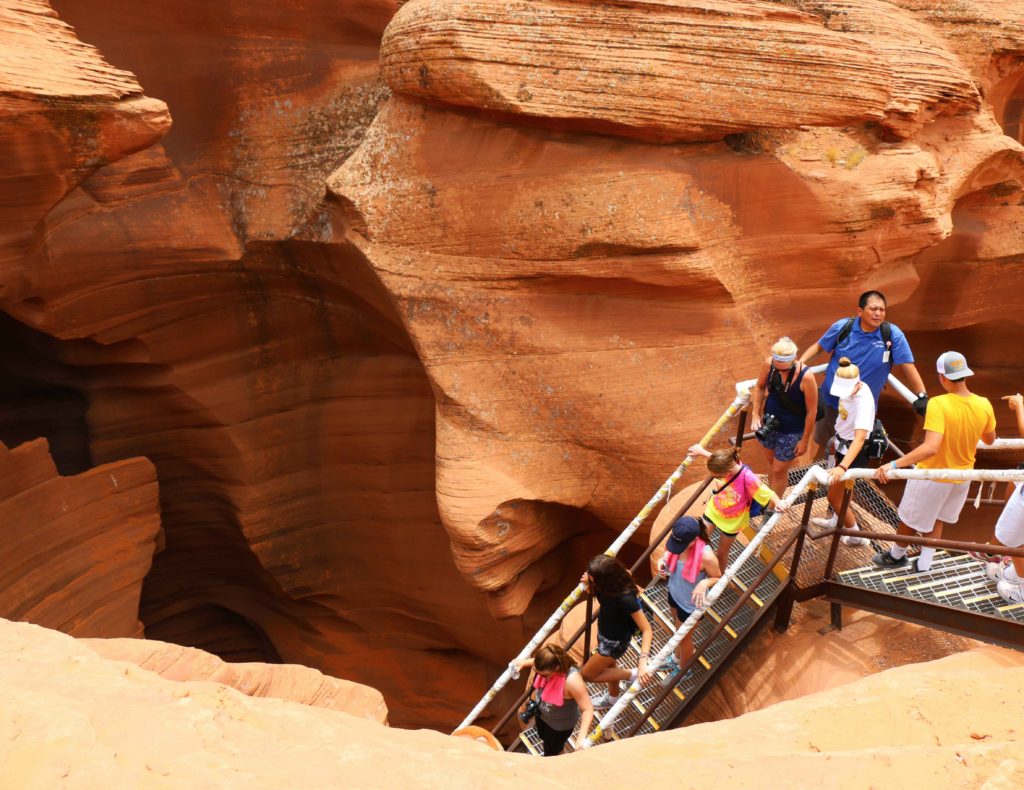 400-meter canyon got its name after its orange-red walls that remind the skin of antelope. The Navajo people though call the canyon Spiral Rock Arches. 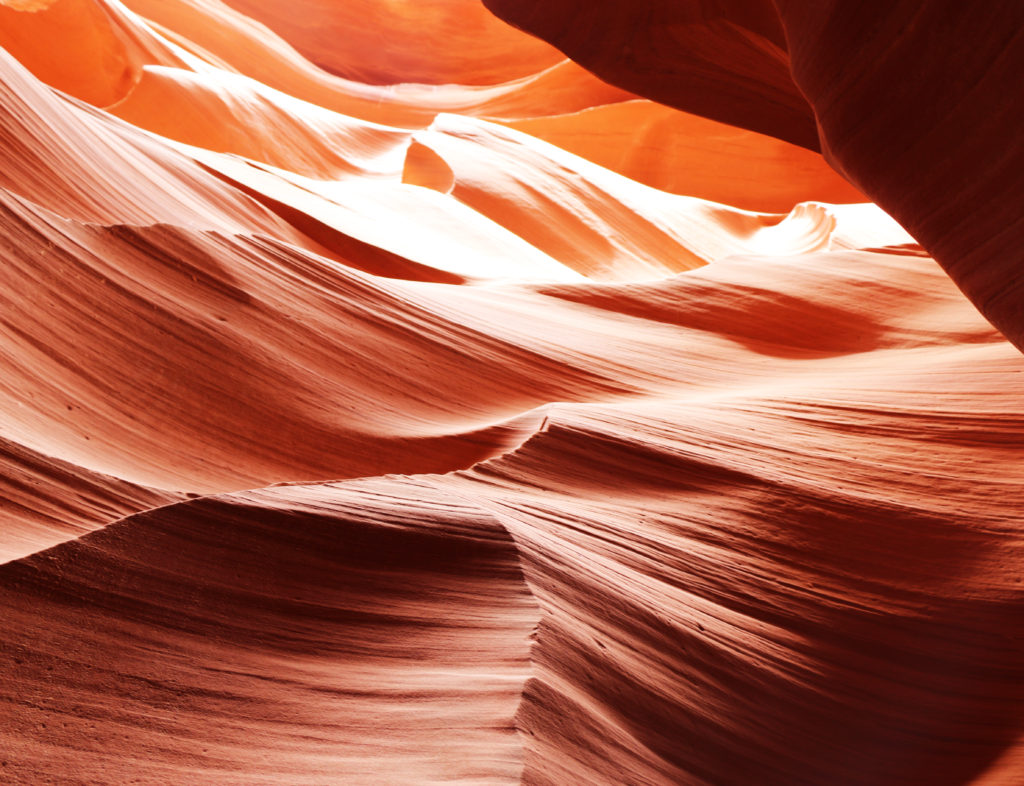 This beauty is a trick of water, wind and time. At first sight you may wonder what water we are talking about in this desert, however annual monsoon season does take place here. During centuries the rainwater was running extensively over the canyon, picking up sand and making a type of corridor. As the time have passed, the corridor has become deeper and smoother. 11 people have lost their lives here in the Lower Antelope Canyon in the result of flash flood in 1997. Since that time it has been forbidden to enter canyon without a guide and permission. 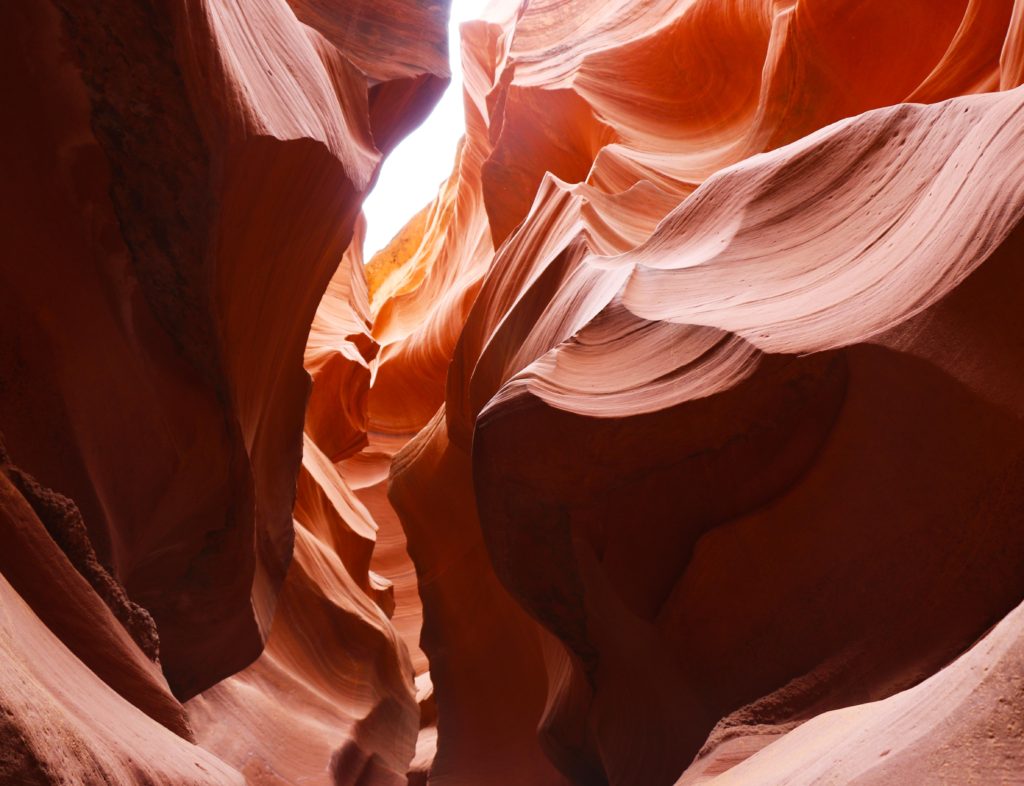 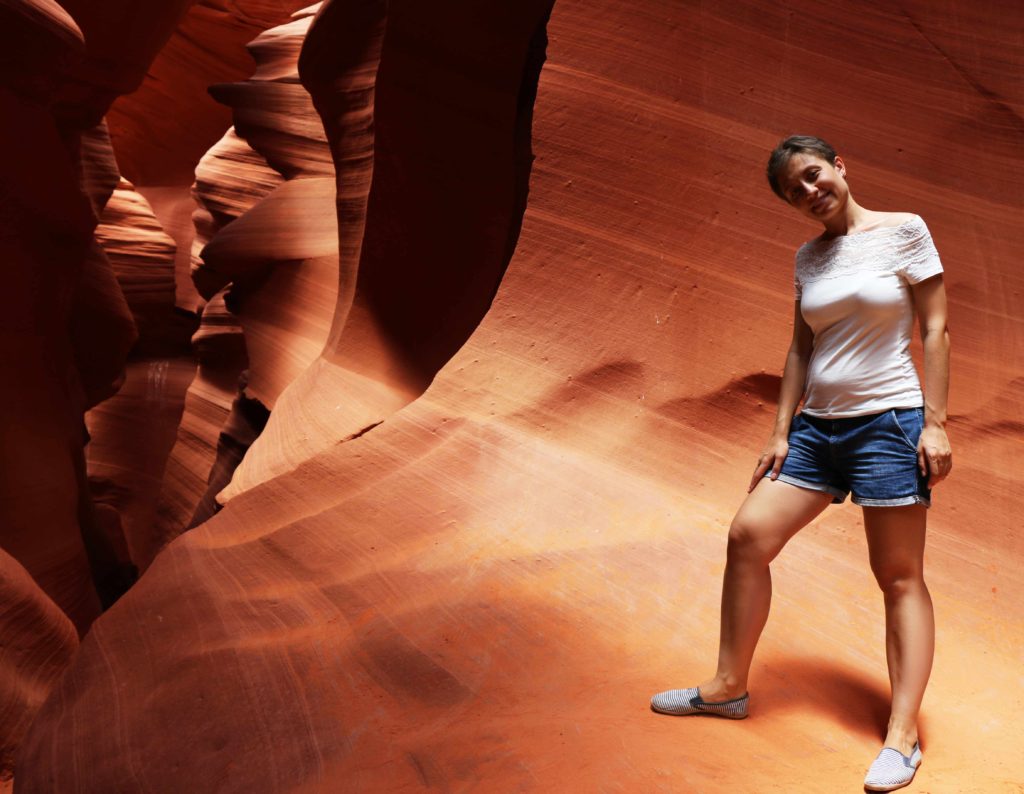 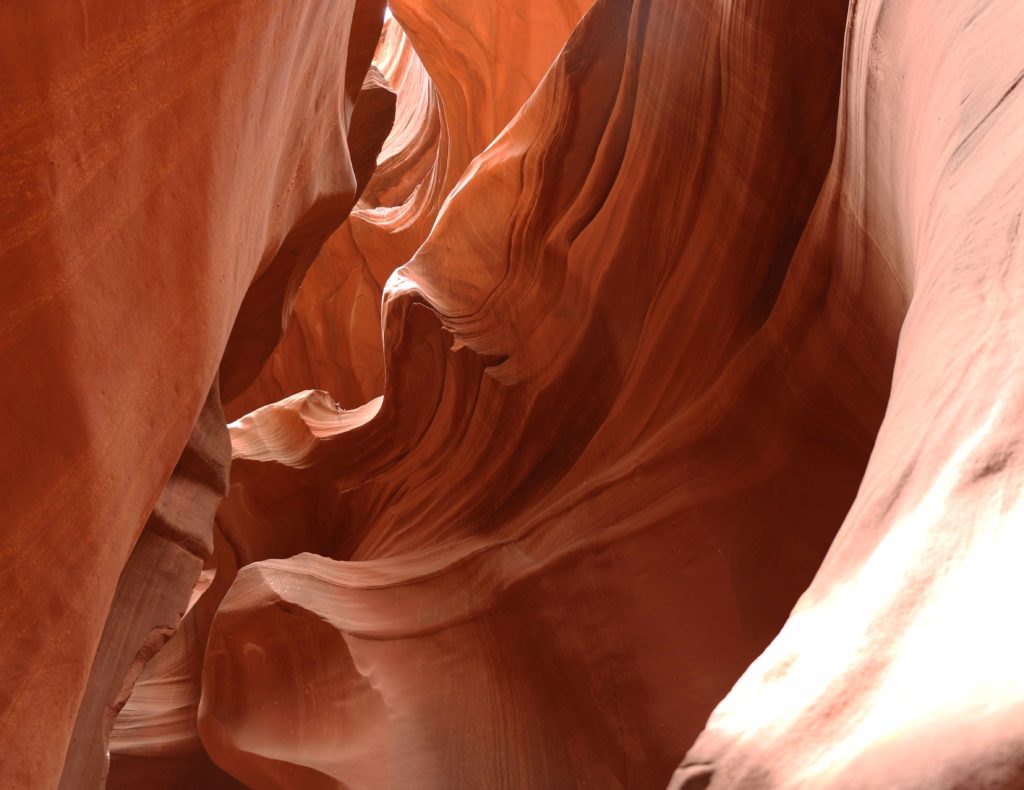 If you want to have beautiful photos you have to join a photography tour that though is not available round the year. Otherwise, turn on your camera’s automatic mode as you don’t have another choice. 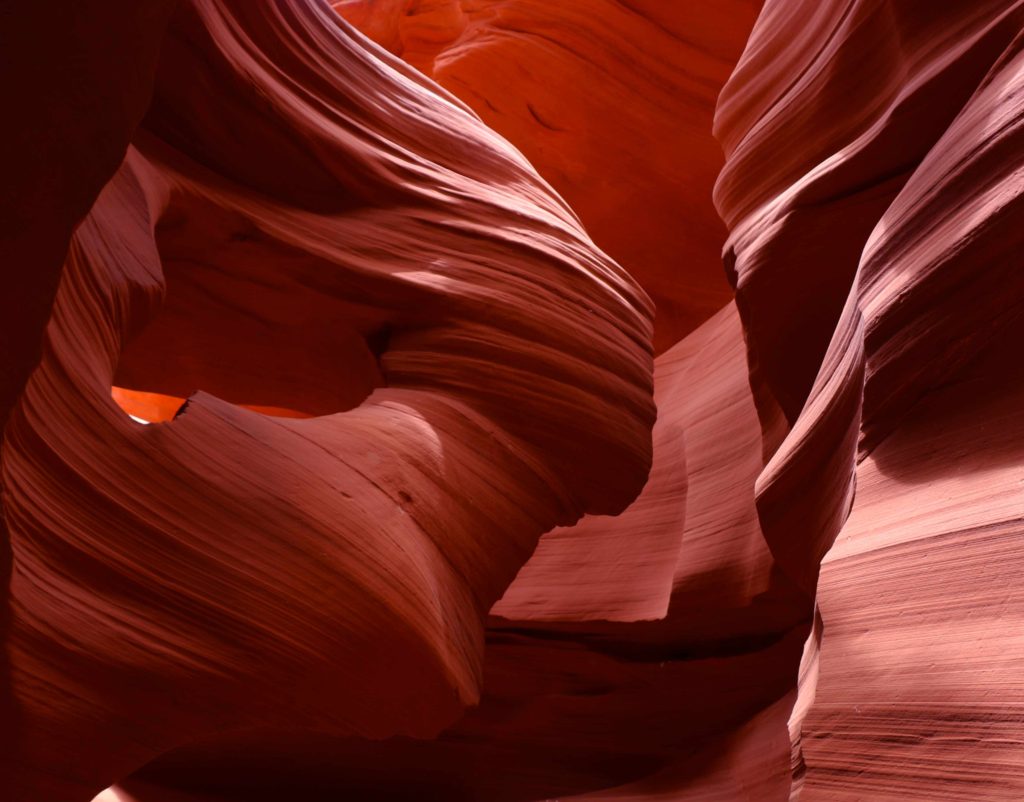 Guides will tell you the names of the rocks and will advise you how to take a better picture of them so it would like  “an eagle” or “a dolphin” or whatever animal it is. I have no idea what is what here, so feel free to let your imagination flow: 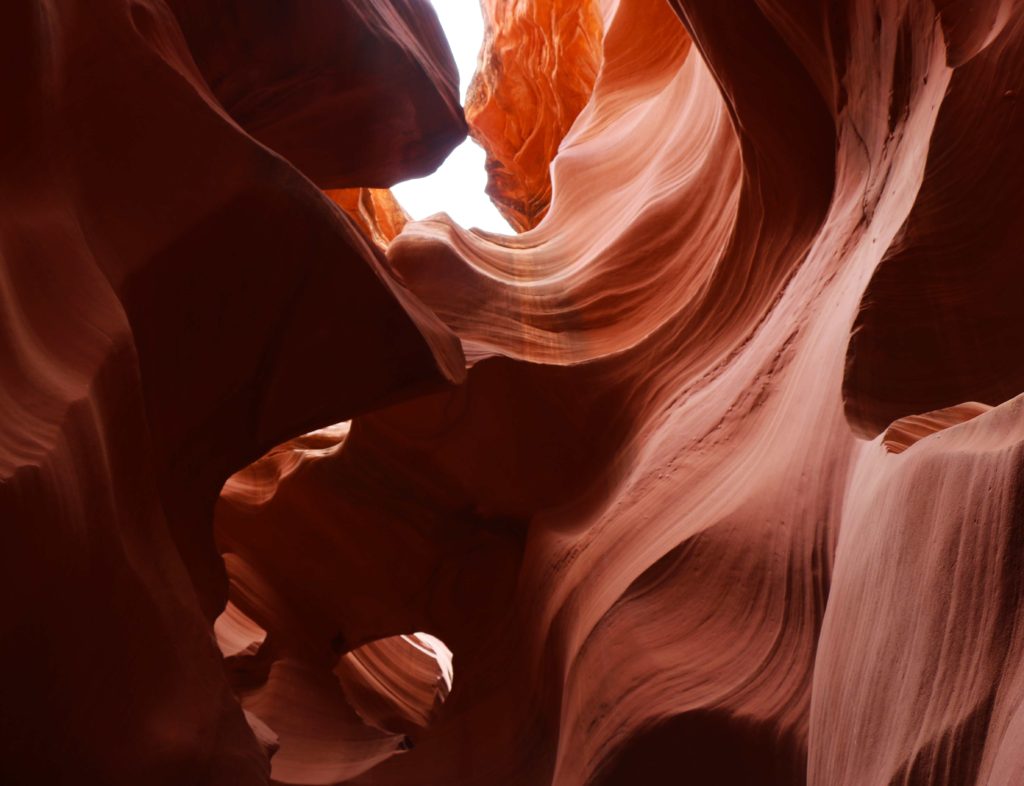 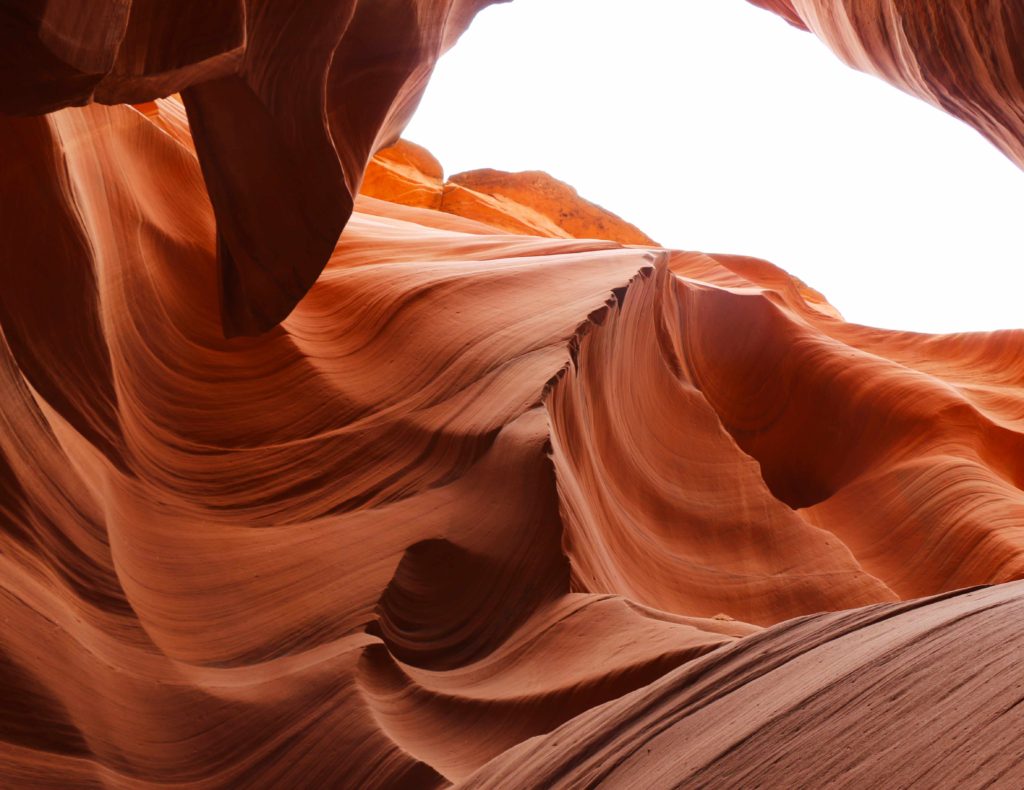 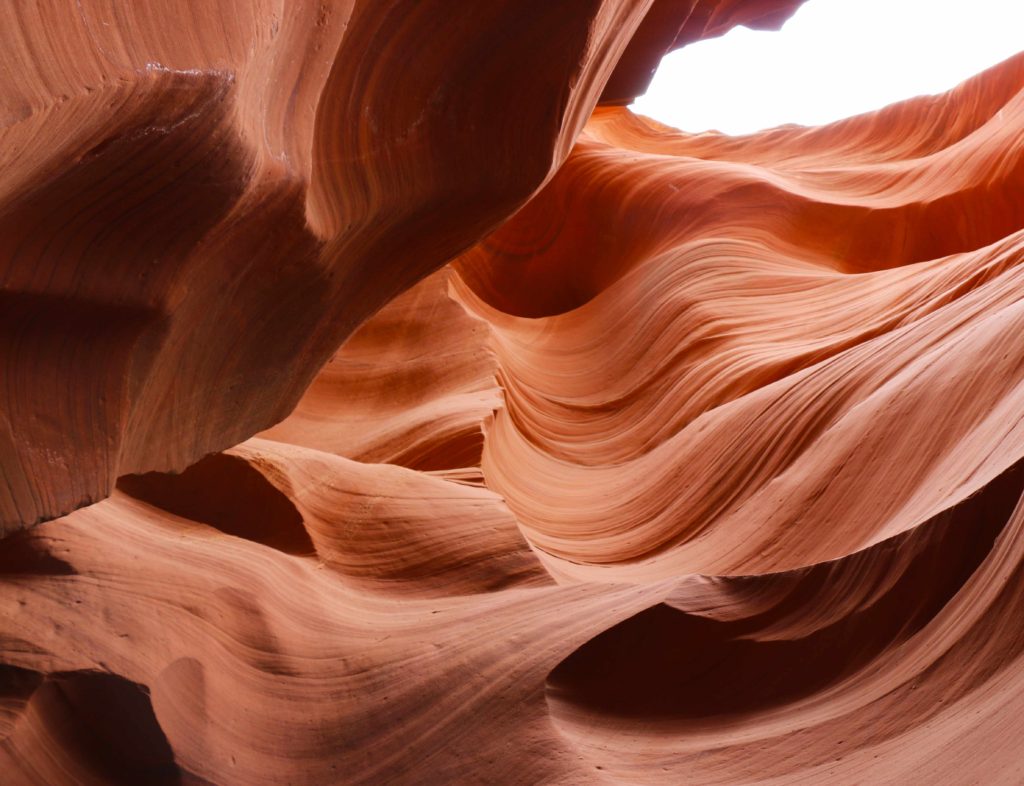 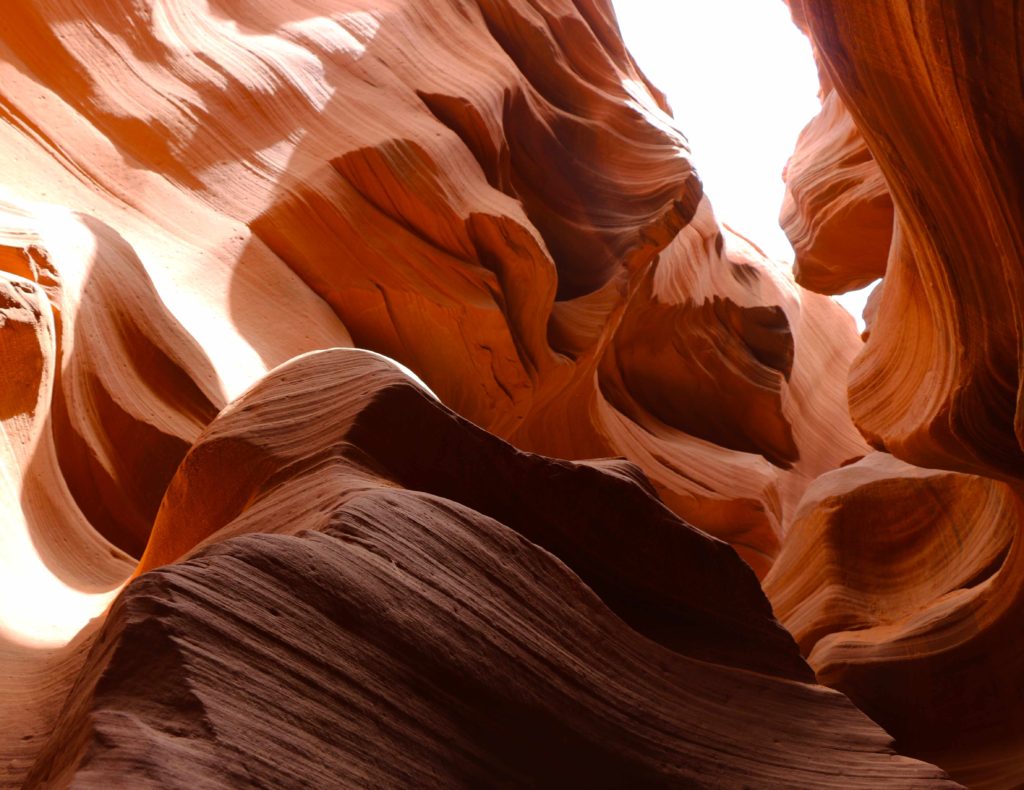 When you leave the canyon you actually admit that all these crazy lines and long waiting time was worth it. However, to be honest the Horsheshoe bend of the Colorado River that is also just very close to the town of Page has impressed me more. 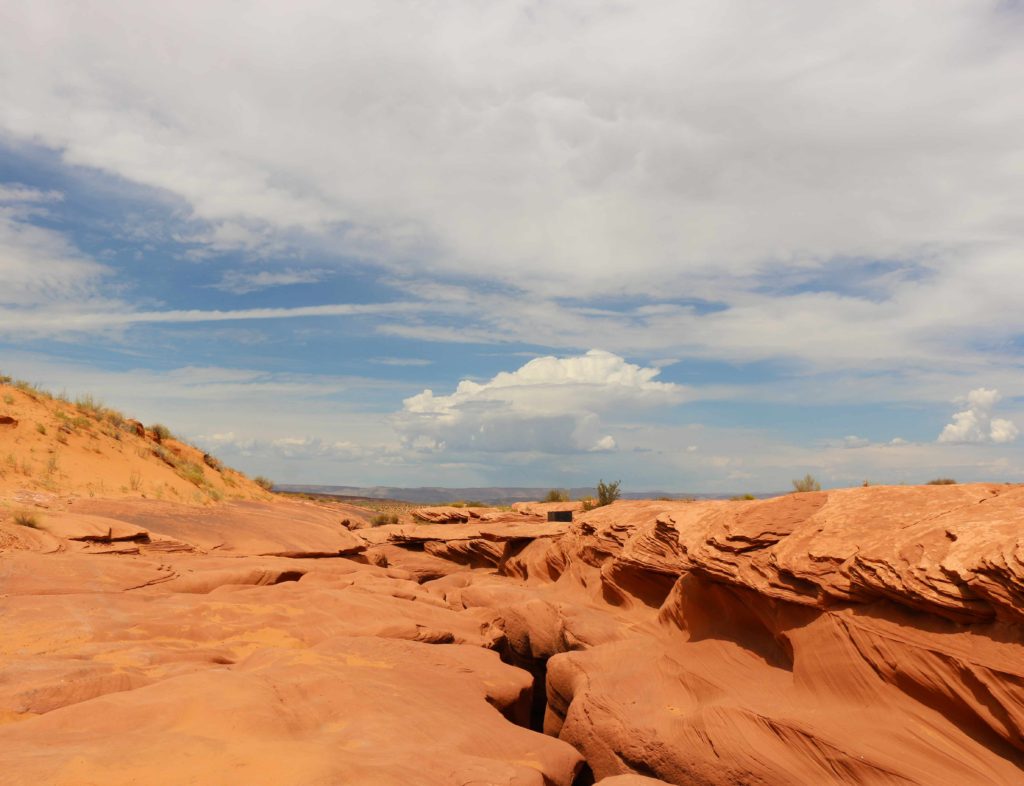 HOW TO BOOK A TOUR AND WHAT IS THE COST OF VISITING LOWER ANTELOPE CANYON.

You can book your tour on Ken’s tours or Dixie Ellis tours website. The earlier the better if you want to catch the best time. 24 hours prior the tour you will be sent a link, which you have to following and re-confirm your booking. Otherwise you will not be in the list of the visitors for this day. The fee per person is $23.81 (as of July 2017) + 5% Navajo Tax. At the entrance you also have to pay additional $8 of another Navajo tax that they accept only in cash. Good luck! 🙂